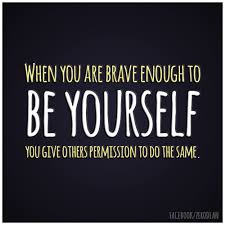 Last week I got a text from a friend which read:

“I wanted to tell you that I’m proud of you. I know it may sound cheesy but I believe you are doing a great job with [your son] and took a brave step in choosing to use better coping skills. 🙂 Love ya!”

Normally I’d think this friend was just being mushy (she’s that kind of friend), but in light of our conversations I know she was giving me permission. Permission for what?, you might wonder. Permission to be brave. Choosing better coping skills, raising my son in ways some don’t agree, and working a job that allows me to place work and life in alignment is not always easy to explain. Even those closest to me don’t understand why I do what I do the way I do it.

Lately my mind has been wondering off to past conversations, piecing little bits of insight together as if they were a puzzle. And, as with all puzzles – at least, in MY puzzle boxes – when I finally get to the end…there is always one piece missing. A while ago I wrote about how a friend asked me “What do you want to be when you grow up?” Normally this question centers on ones job or a field of choice. Since I was already doing what I wanted to do with my career, I was a bit confused and even a little irritated by the question.

When I finally dug that question out of the back of my brain last week, I thought about it in a difference context. What do I want to be when I grow up? In other words: How would I want people to remember me when I’m six feet under the ground.

1) Forget what others think. I know this is easier said than done. But if you are going to be the captain of your ship then you need to realize that both the captain of the Titanic and the Santa Maria were brave. The outcomes were completely different between the two, obviously, and well…you have to prepare that this may be the case for you, as well. Which leads to my next point.

2) Don’t be afraid to fail. If you aren’t failing, you aren’t trying. Many people in our history learned numerous times how not to do something – they never considered themselves a failure (think Thomas Edison and the lightbulb.) I have started three businesses in my life. One was a huge success and the other two paid the bills…barely. I never considered myself a failure with the latter two. I simply learned better ways to do it next time I’m brave enough to jump into another business venture.

3) Buck the system. Many of my favorite and most admired mentors live without television, cars, and many homeschool or unschool their children. I used to think these souls were just weird. Now I think “They have so much that I want”. I’m making changes each day to get to where they’ve led me. The thing is, if I go down this route, then I (most likely) will be someone another thinks is just weird. And, I don’t really care. That’s how I know I’m braver than I used to be. (I could digress into a story of an inner conflict over buying a pair of nude shoes because I was worried about how others would perceive me and my older shoes. Turns out, I didn’t buy the shoes. Turns out, I don’t really care what other think. This, friends, is progress.)

4) Always (always) trust your gut. Many don’t know how to do this. Many are afraid of their own higher self’s direction. Many ignore the signs and many live lesser lives because of it. In order to trust your gut, you must be willing to stop listening to those you love sometimes and start getting quiet enough to hear your own inner voice. This isn’t easy. In fact, I find in a world where people are full of opinions and ‘best intentions’ this is really one of the hardest steps of all.

5) Be willing to lose (or give up) everything to start over. I remember in 2004 my (then) husband prayed for change. He felt strongly that something drastic needed to happen in order for him to be happy. Within 24 months he lost his job, his home and later, his marriage to me. And yes, if you met him today, I’d say he is the happiest he has ever been with a less stressful job, a smaller home in the snow-country of New England, a new wife and two beautiful children. Sometimes you have to lose big in order to really win.

Leo Babauta calls this ‘burning the farm‘. I don’t necessarily believe that my fifth recommendation is always necessary in the journey of being unstoppable. I do, however, believe that the Universe always finds ways to auto-correct itself and if steps 1-4 aren’t enough to get you on a road of bravery, then recommendation number five might not be a choice. I find that being proactive keeps me from usually having to have fate step in and wreak havoc with life in order to strap me with a life lesson without my consent.

Are you willing to be weird? How about brave? What are you doing to make sure you get the life you were destined to have?